These are those who have passed on in recent times whom I have known on a very personal level. These individuals made an investment in my life to such a degree that I want to do more than simply attend a memorial service in their honor. Hence, this page. I want the reader to gain some sense of appreciation for these individuals as I have in the time that I have known them up close and personal. Not all tributes are posted on this particular website, but you can click the links provided here and read each tribute in its entirety wherever it is anchored.

Hope you are impressed and blessed.

My Tribute to Jonathan Sandys –
Great Grandson to Winston Churchill

Our wonderful, remarkable friend — Jonathan Sandys — entered eternity on Saturday, December 29, 2018, at a hospital in London. He succumbed to a rare lung disease that made him a candidate for a double lung transplant … which he never received.

My Tribute to Bob Batho

Bob was a well-known and highly successful architect here in

Houston. One of his most acclaimed structures here is the domed sanctuary of New Life Church on the city’s west side.

Bob was also a Board Director of this ministry, and a devoted friend and suppoter since the mid-1970s. Read his Tribute.

Bob was specially honored at the Veteran’s Memorial Cemetery in Houston (map) on his birthday — Friday, October 13. The vehicle processional began promptly at 10:45am and the tribute began at 11am.

My Tribute to Astronaut Gene Cernan

Gene and I first met in 1987 at the “Vision ’87” Space & Telecomm Symposium at Houston’s Albert Thomas Convention Center. I was media 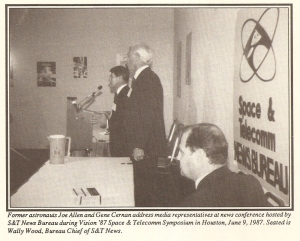 director for the 3-day conference on space entrepreneurism, and I facilitated all of the press conferences in the Media Room. Gene and astronaut Joe Allen held a press conference in that room. Gene would later be instrumental in my starting the National Space & Technology Association. Read his Tribute.