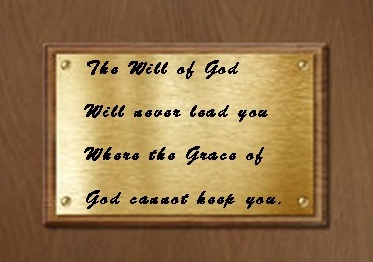 A plaque that fell to my feet in a department store in 1975 in Oklahoma City. It was my first time away from home in Houston.

Click on each icon or link below for their detail page –

Eph. 1:4-5 tells us in the Living Bible: “Long ago, even before He made the world, God chose us to be His very own through what Christ would do for us; He decided then to make us holy in His eyes, without a single fault — we who stand before Him covered with His love. His unchanging plan has always been to adopt us into His own family by sending Jesus Christ to die for us. And He did this because he wanted to!” This is a mystery to us …

“The Embedded Internet: The Final Evolution” (2000)

The Bible predicts a cashless society would come upon the earth, involving every nation (Rev. 13:16-17). Today, that reality is evolving in ways unimagined a generation ago. In this, Wally’s first book, he told of a world in the 21st century that would be overseen by a “central computer system” that would be the epicenter of world politics, economics and business. He called it Cencom, for Central Computer. Nearly ten years later, the Internet was born, fulfilling everything and more foretold in this book. [Out of print]

Isaiah 18: To a Mystery Nation in a Distant Time (40-pg manuscript)

This ancient prophet prophesies to an unusual nation set apart from all others in its stature and power. This unique nation would become great … internationally powerful … be heavily judged … and remarkably revived “before the harvest.”

A collection of Wally’s appearances in speaking engagements, radio interviews, YouTube videos and a TV pilot he produced at KETH public television in Houston in 2015.

“An end-time discipling of last day disciples.”
Messages designed to refocus our attention on what really matters —
“prepare to meet thy God” (Amos 4:12).

Wally’s experience as a print and broadcast journalist extends as far back as 1972 as he worked for both a local radio station and a local newspaper. Those venues opened doors for him in religious broadcasting starting in 1975 and ran through the mid-’80s. From the early ’70s to 2013, he also covered the space and hi-tech industries through the groups he started: The Shuttle News Service (1986), the Space & Telecom News Bureau (1987), and most recently, the National Space & Technology Association (2003-2013). Through it all, he never lost focus on his life’s mission: To research and report the global signs and trends heralding the soon return of Jesus Christ (Mat.24:33-34). Even today, he continues to bring into biblical focus and prophetic clarity today’s unfolding developments. Click on the icon above to “The Wood News Group” to begin your tour of this expanded outreach.

Wally Wood Ministries is a 501(c)3 tax-deductible non-profit ministry based in Houston, Texas. All tax-exempt donations can be made either online by clicking HERE … or by regular mail, sending checks made to Wally Wood Ministries, to P. O. Box 42005, Houston TX 77242. Thank you for your love, prayers and support.

ADVERTISEMENT DISCLAIMER: Ads appearing on this site are not endorsed by Wally Wood Ministries. Likewise for any commercial ads that may appear on any of our network sites. Their appearance on these pages are strictly the responsibility of the provider of this site and the third party advertisers in partnership with the provider. We apologize for any potential offense by the ads placed on these pages.